D haka is the capital and the most populous city of Bangladesh.  Essentially a commercial hub, the city is the centre for political, cultural and economic activity in the country, contributing approximately one-third of Bangladesh’s GDP. Key industries include readymade garments and textiles, banking, education, healthcare, IT, telecommunications and pharmaceuticals.

The Hazrat Shahjalal International Airport forms the primary mode of entry into the country. As the largest of only three international airports in Bangladesh, it serves multiple international commercial airlines thereby connecting Dhaka to most major cities across the South Asian, South-East Asian and Middle-Eastern countries. The airport also serves as the base for Cargo movement out of Dhaka – the backbone of export for the country. Additionally, domestically, Dhaka is well connected by air, road and rail to major cities in Bangladesh enabling it to operate as the focal point of activity in the country.

Expectedly, Dhaka’s hotel market is driven primarily by commercial and industrial activity. While hotels cater to five distinct segments, the estimated bifurcation of demand is exhibited in Figure 1. The Commercial segment contributes the largest share of room night demand in Dhaka sharing some overlap with the Extended-Stay segment. Being the capital and the foremost commercial destination in Bangladesh, the city witnesses significant demand from the Airline segment. Additionally, the Meetings and Group segment, is fueled by the growing demand for conferences and meetings in hotels. While most of this demand is commercial in nature, it also encompasses social events, which is a growing trend in the city. Traditionally, social events were catered to by local banquet halls or managed at home; however, of late one can see a change, with several of these events being hosted in hotels, contributing to room demand as well. Consequently, there is negligible demand from the Leisure segment owing to the sheer focus on commercial demand in the city.

In the past, Dhaka’s hotel market benefited from demand consistently outpacing supply. However, in the last few years, demand for hotels in the city has been unstable. The structural collapse of Rana Plaza in 2013, the 2016 terrorist attack in Dhaka’s upmarket Gulshan area, and incidents of political unrest have raised security concerns in the city, resulting in rapid decline in demand during these periods, particularly from foreign travelers.

The Dhaka hotel market at one point in time, commanded room rate premiums equal to New York City owing to scarcity of quality accommodation coupled with robust demand. Ever since, the hotel market has witnessed gradual growth in terms of supply and the introduction of a large base of internationally branded hotels. Dhaka has witnessed a year-on-year growth in supply of 7.1% between 2015 and 2017, contributing to a five-year compounded annual growth rate (CAGR) of 4.7%. As of 2017, the city’s hotel market consists of approximately 2,300 rooms. Analysis of the existing inventory, as highlighted in Figure 2, gives us insight on the composition of the hotel supply: hotels are primarily positioned in the Upscale and Upper-Upscale segment. Also, the majority of supply in the market today is affiliated with an internationally recognised hotel chain, and only 35% is represented by independent home-grown brands.

Going forward, approximately 3,700 branded rooms are expected to enter the market over the course of the next seven years. While the majority of this supply is still planned to be developed as Upscale or Upper-Upscale products (approximately 50%), the remaining supply is almost equally divided between the Midmarket, Upper-Midmarket and Luxury segments.

Given the additional supply in the market, bouts of unrest and amid security concerns, the Dhaka hotel market has exhibited inconsistent performance in recent years. Post the 2013 Rana Plaza incident and the 2014 election agitation, the city witnessed a robust improvement in demand in 2015, resulting in healthy occupancies. However, the upcycle was short lived, with the unfortunate attack in Gulshan triggering another decline in demand, evident from the 2016 performance of the city’s hotel industry (Figure 3). Thereafter, demand could be seen picking up again, and despite a slow first quarter, occupancies in 2017 showed signs of recovery.

Average rates, on the other hand, have displayed a year-on-year decline in Dhaka since 2015. This is not surprising, since a rate correction was inevitable in the market. The once limited inventory in the city commanded inflated room rates; but, with new hotels opening, and the base becoming larger, the pricing of rooms is getting rationalised. We expect this trend to continue, as more supply enters the market, going forward. 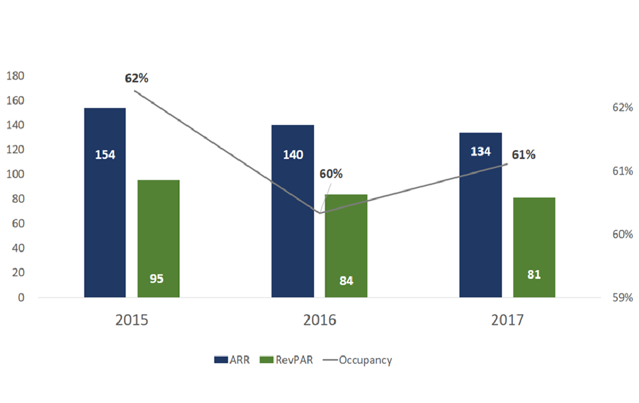 There are a few anticipated challenges and opportunities for the Dhaka hotel market. Challenges mainly stem from security and safety concerns for the most part. With the upcoming elections in Q4 2018, there could be a fair bit of flux in the city’s hotel market, if political agitation is prominent. Besides, excess supply of rooms in a specific market segment could undermine its performance; nonetheless, it could also temporarily hyper-inflate the performance of hotels across the other segments. This could entice some investors to seek quick returns; however, investing in the appropriate hospitality product is vital.  Another opportunity for the market lies in the fact that supply, both existing and proposed, is focused on the Upscale and Midscale segments, leaving the Budget and Luxury positioning wide open. Thus, our outlook for the market, overall, is cautiously positive, supported by our experience, market data and the uncertainty of the enigma that is Bangladesh.