The Need for a Hotel Volatility Index

It’s been 20 years since we’ve been tracking the Indian hospitality market. The fact that the branded supply side has grown over six times during this period from 18,000 hotel rooms to 1,20,000 odd rooms should not be missed, as this makes it more necessary than ever to monitor the performance of hotel markets across the country in an accurate and methodical fashion. We often notice that the performance statistics of a market are skewed due to fresh supply coming in; hotels which are yet to stabilise pull down either the overall occupancy, the average rate, or both. This is especially true for the rapidly emerging hotel markets not just in India, but other Asian and African countries as well.

Consider this – when negotiating a hotel management contract, one of the most important provisions that get discussed is the operator performance test.

Increasingly, owners are seen pushing for a RevPAR-based test that requires the hotel to achieve a RevPAR that is equal to or exceeds a pre-defined threshold percentage of the weighted average RevPAR of its competitive set for the test period. There is a considerable amount of back and forth between the parties on the determination of the hotel’s competitive set, with the operator laying down numerous ground rules for the selection of properties. Once the hotel opens, stabilises, and the test provision kicks in, the operators are quick to point out that they are performing at or above market levels, which may not be entirely accurate.

If the subject hotel is a stabilised property, then its performance needs to be ideally benchmarked against a stabilised competitive set, and not a set of hotels of the operator’s choosing. We have often seen operators approach owners about reviewing or modifying the competitive set on grounds that a new hotel has opened in the area. By and large, owners tend to agree to such requests thinking it is reasonable to include hotels that are of a similar market positioning and overall quality as the subject hotel, even if the resulting competitive set is now a mixed bag of similar-positioned stabilised hotels and new properties. The fall out of such decision can be very detrimental for the owner, and the Hotel Volatility Index shows why.

We have taken a base of 80 well-established, stabilised hotels that have been operational since 2010 or earlier – 60 urban hotels and 20 leisure properties. Together these 80 hotels have nearly 17,000 rooms across 24 different cities in India. Understandably, Mumbai, NCR, and Bengaluru dominate the urban locations, while the leisure locations have high representation from Goa and the Agra-Jaipur-Udaipur circuit. We firmly believe that similar to the Sensex, these 80 hotels can provide an accurate gauge of the country’s hotel industry and serve as a reliable benchmark for properties across India. 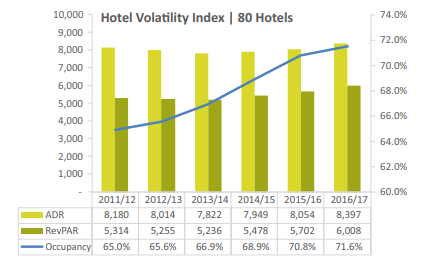 Exhibit 1 depicts the occupancy, average rate and RevPAR performance of the 80 hotels from 2011/12 till 2016/17, further categorised by urban and leisure locations. Please note that the base consists of the same 80 hotels year on- year and, going forward, it will remain the same to provide a correct picture of the index’s performance over time.

Comparing the performance of the index to the national average for 2016/17 (see Exhibit 2), we observe that the former had a RevPAR premium of 62%. What’s more, Leisure hotels in the Hotel Volatility Index recorded an average RevPAR that was a staggering 139% higher than the All India sample set. Another interesting aspect to note is that across the different star classifications, the highest occupancy that was recorded in 2016/17 was 66.5% (by Five-Star Deluxe and Three-Star hotels), which is much lower than the 71.6% recorded by the 80 hotels in the index.

This brings us back to our earlier discussion on why choosing the correct performance benchmark is critical. Hotels that have been operational for five years or more should use stabilised assets as an additional point of reference and not just the customised competitive set in their specific market. This dual standard of assessment will offer an owner a more rounded view of the hotel’s performance, and by that the operator’s abilities.

On a concluding note, what the Hotel Volatility Index also clearly shows is that while operators did a good job of increasing occupancies from 65% in 2011/12 to 71.6% last year, they have not moved the needle on room rates, that grew just 2.7% in real terms and when adjusted for inflation, registered a negative growth leading to weak bottom lines. Add to this the freebies of breakfast and other benefits the operators regularly dole out, and the owner’s return continues to deplete. Clearly the current up-cycle is an opportunity to correct this and operators across board would be advised to take effective steps in this direction.